In the 1st reading of last Sunday (Exodus 20:1-17) God gave his people what is known as:
The ten commandments.
In that text, we can read:

I sometimes reflect that God did not want people to ‘create’ a representation of him
because he wanted them to see his true image.
He, himself, was to help us discover this image through the message he was to give us.
Something of this message is given to us in today’s readings.

The 1st reading of this Sunday (2 Ch.36:14-16,19-23) describes for us something of who God is:
“The Lord, the God of their ancestors, tirelessly sent them messenger after messenger
since he wishes to spare his people.” 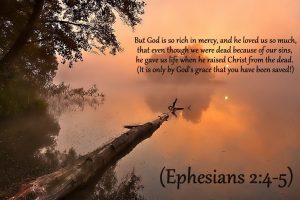 The 2nd reading (Ephesians 2:4-10) tells us:
“God loved us with so much love that he was generous with his mercy. 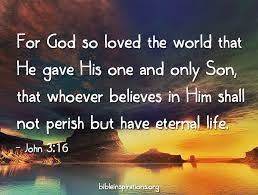 “God loved the world so much that he gave his only Son,
so that everyone who believes in him may not be lost,
but may have eternal life.

This is the image of God – the true image of who he is and what he wants to be for us.
We should be careful not to present any other image of God –
it would be a poor image,
truly a caricature of him…

Note: Another reflection on a similar theme is available in French at: https://image-i-nations.com/4e-dimanche-du-careme-annee-b-2021/

And a video (in English) presents Nicodemus meeting Jesus in today’s gospel: https://youtu.be/rfpNLx-uFMs 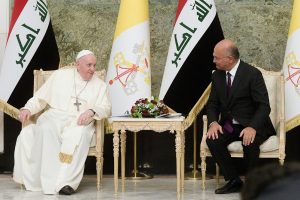 Pope Francis arrived in Iraq March 5 for a three-day visit aimed at encouraging the nation’s historic but diminishing Christian community. ..

The pontiff made impassioned and repeated pleas that the country might avert further conflict.  « May the clash of arms be silenced! » exhorted Francis. « May their spread be curbed, here and everywhere! « May the voice of builders and peacemakers find a hearing! » said the pope. « The voice of the humble, the poor, the ordinary men and women who want to live, work and pray in peace.”

The Scripture texts offered to our reflection for Sundays and Feast days come in different… ‘attires’.
Some interesting, some encouraging, some quite challenging.

The 2nd reading of this Sunday gives us a short text of the first letter of Paul to the Corinthians (1 Cor.1:22:25).
According to me, the message we find there belongs to the last category – it is indeed quite challenging 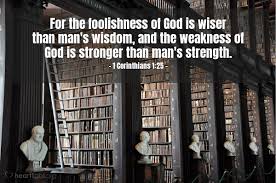 It is focused on four words:
WISDOM, FOOLISHNESS, WEAKNESS, STRENGTH.

Paul did not mince his words and this text calls on those he was writing to – and on all of us – to do some… soul-searching!
It asks of us to do some… re-vision, yes, to have a second look, at ourselves:

A checklist to help us find out if we are guided by God’s wisdom or… our own foolishness.
Quite a project for Lent… in fact, it may serve us for a life-time!

Note: Another reflection on a different theme is available in French at: https://image-i-nations.com/3e-dimanche-du-careme-annee-b-2021/

If I were asked to make a list of all the petitions I presented to God the past year,
I would be at a loss where to start.
I would find it impossible to remember all the things I asked from him.

He told us clearly: “Ask and it will be given to you.” (Mt.7:7)
I have no doubt that he means this but…
Somehow, I feel I may not always ask what he has in mind to give! 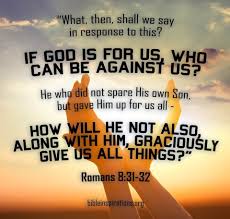 As he writes to the Christians of Rome, Paul tells them something rather astonishing.
The 2nd reading of this Sunday gives us his words (Rom.8:31-34):

“He who did not spare his own Son, but gave him up for us all –
how will he not also, along with him, graciously give us “all things?”

Paul is convinced that God is ready to give us “all things”.
It is an amazing statement, an amazing expression of faith!

To believe without a doubt that God will give us ALL…

It IS an amazing expression of faith indeed… and I can only hope –
no, I can expect that it is included in the ‘all’ that He is willing to give me!
Provided… I ask for it, of course.

Note: Another reflection on a different theme is available in French at: https://image-i-nations.com/2e-dimanche-du-careme-annee-b-2021/

And a blog, in French also, reflects on the 1st reading where God invites Abraham to count the stars: https://image-i-nations.com/une-invitation-quon-ne-recoit-pas-tous-les-jours/

We have entered a new period of what is called the liturgical year.
We are now in the Season of Lent – a season rich in meaning. 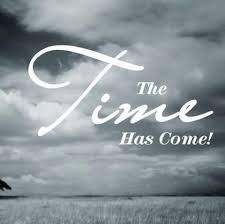 The time of what? The time for what?
Jesus answers:
“The kingdom of God has come near.”

We are often told to turn to God, to go to him, to be near him.
We are reminded that this Lenten period is meant for that.

This is what he wanted from the very beginning when he created human beings.
He wanted to live in a relationship of proximity, of intimacy with us –
this is the meaning of the 1st reading where we see God making a special alliance with his people (Gn.9:8-15).

What an offering that is!

Note: Another reflection on a different theme is available in French at: https://image-i-nations.com/1er-dimanche-du-careme-annee-b-2021/

The world used to be a much bigger place, at least when you consider the difficulty involved with transmitting information from place to place.
In the beginning, we simply had to walk and talk to one another, and then we were able to write and exchange letters. Ideas and music traveled the world at a snail’s pace as compared to today.

But then the radio was invented, and suddenly transmitting ideas hundreds of miles became a relatively trivial matter! The world became connected, and it would never be the same. Let’s celebrate the history of the radio and the interconnectedness it brings us!

We are often told that we should turn to God.
We should come to him in all kinds of situations and pray to him for all our needs.
And, of course, many writers and preachers tell us HOW we should do this.

Today, I choose to reflect on HOW NOT to do so.
I personally believe that we should NOT turn to God with fear, hesitation, shame or doubt. 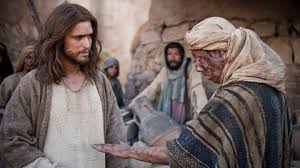 What confirms me in this conviction is the gospel text of this Sunday (Mk.1:40-45).
Here comes a man afflicted by a shameful disease – that man is a leper.
The rule in his society is that he should keep away from everyone,
as we see in the 1st reading (Lv.13:1-2,45-46).

Jesus is a respected religious leader and he is an outcast.
Yet, this leper is not afraid or ashamed, he does not hesitate or doubt.
He asks Jesus to cure him, and Jesus does so without delay!

Why do we not do the same with our difficulties, problems and, possibly, even our shameful situation?!

Note: Another reflection on a different theme is available in French at: https://image-i-nations.com/6e-dimanche-de-lannee-b-2021/

When the name ‘JESUS’ is mentioned, everyone hearing the word tries to picture the one known as ‘the Man of Nazareth’.
Pictures of him abound in books, magazines, and now the web offers also countless representations of him.

I, personally, think that the best way to know him is to look at how he shows himself in the gospel.
In the text of this Sunday (Mk.1:29-39), three ‘pictures’ of him are given to us. 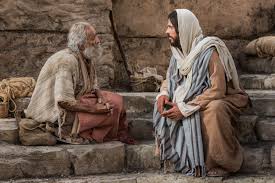 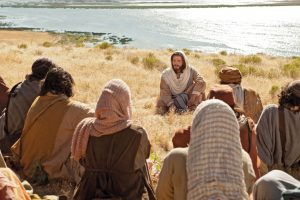 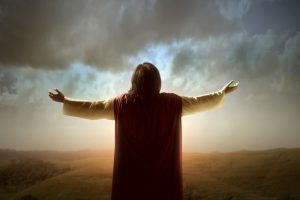 We see him healing people, praying, and preaching.

These three images represent the main aspects of his personality:

a man of compassion,
a man of God,
a messenger of God.

In him, we meet God and we experience the compassion of God,
we receive God’s message and God’s healing.

Of course… we need to ask for it…

Note: Another reflection on a different theme is available in French at: https://image-i-nations.com/5e-dimanche-de-lannee-b-2021/

With unanimous vote in the General Assembly, February 4 becomes the (first) International Day of Human Fraternity. 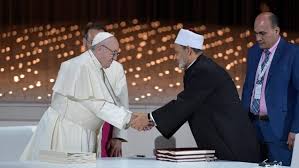 The United Nations General Assembly voted unanimously to designate February 4 — the anniversary of the signing of the “Document for Human Fraternity” by Pope Francis and Grand Imam Ahmad Al-Tayyeb — as the “International Day of Human Fraternity.”

The General Assembly voted Tuesday and invited Member States and the United Nations system to include this celebration in their calendar beginning in 2021.

Supported by Egypt, Saudi Arabia, the United Arab Emirates, Equatorial Guinea, Morocco, Burkina Faso and Venezuela, the U.N. resolution takes note of the meeting between Pope Francis and the Grand Imam of Al-Azhar, Ahmed el-Tayeb, on February 4, 2019, in Abu Dhabi.

The resolution also calls on all member states to “continue to work for a culture of peace in order to contribute to peace and sustainable development.” This includes, according to the document, the mobilization of “the efforts of the international community in favor of peace, tolerance, inclusion, understanding and solidarity.”

While introducing the resolution, representatives of the United Arab Emirates said it was a response to growing religious hatred amid the COVID-19 pandemic, the U.N. website said. The resolution says that the General Assembly reaffirms the purposes and principles enshrined in the Charter of the United Nations and the Universal Declaration of Human Rights, in particular the right to freedom of thought, conscience and religion.

Word of the Editor: The following video, from the Pontifical Council for Interreligious Dialogue, speaks volumes… https://drive.google.com/file/d/1Mnof8dSFIoR-mU74W8SV-l0X2CohMm8B/view?usp=sharing 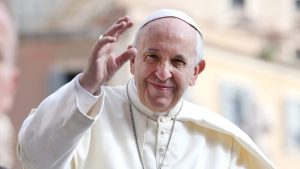 About World Day for Consecrated Life

In 1997, Pope Saint John Paul II instituted a day of prayer for women and men in consecrated life. This celebration is attached to the Feast of the Presentation of the Lord on February 2nd.

« This then is the consecrated life: praise which gives joy to God’s people, prophetic vision that reveals what counts. Consecrated life is not about survival (… )it’s about new life. It is a living encounter with the Lord in his people. It is a call to the faithful obedience of daily life and to the unexpected surprises from the Spirit. It is a vision of what we need to embrace in order to experience joy: Jesus ».
Pope Francis, WDCL Homily on February 2, 2019.

Religious life is this vision.  It means seeing what really matters in life.  It means welcoming the Lord’s gift with open arms, as Simeon did.  This is what the eyes of consecrated men and women behold: the grace of God poured into their hands.  The consecrated person is one who every day looks at himself or herself and says: “Everything is gift, all is grace”.
2020 Papal Homily for the 24th World Day for Consecrated Life