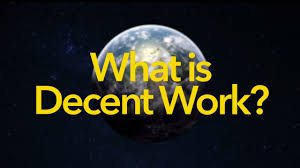 It is good to ask ourselves the question: WHAT IS DECENT WORK?
And October 7th is a good day to answer it! 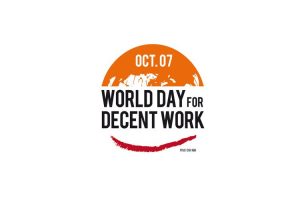 28th Sunday of Year B

We are used to hearing about and speaking of the TWELVE apostles of Jesus.
But was it not possible that the group could have counted… thirteen apostles, or even fifteen?

There is a text in Luke’s gospel (Lk.9:59-61) where we see Jesus calling some people who are not ready to follow him. 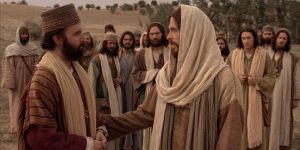 And today’s gospel text (28th Sunday of Year B – Mk.10:17-22) shows us another scene where, again, Jesus invites a young man to follow him but… this call is not answered.

The young man wanted a better life, a life closer to God and more faithful to him.
But his existence was already filled with too many things, with too many of the rewards that wealth can provide.
He was not ready to part with all his riches…
We are told: “He went away sad.”

A bitter taste: that of delusion, thinking that one is what one has…
A person has become what he/she owns when so much more is offered…

May we overcome such a temptation and be spared such a fate.

Note: another reflection is available on a different theme in French at: https://image-i-nations.com/28e-dimanche-de-lannee-b/

Since 2015, the richest 1% has owned more wealth than the rest of the planet (Oxfam).

71% of people say governments should work towards a pay rise for workers (ITUC Global Poll 2017).

80% of people say the minimum wage in their country is too low (ITUC Global Poll 2017).

This year marks the 10th anniversary of the World Day for Decent Work (WDDW), which will fall on 7 October. Millions of people have taken part in WDDW events since 2008, and this year will also be a day for global mobilisation: all the trade unions in the world will stand up for decent work.

Decent work must be at the centre of government actions to bring back economic growth and build a new global economy that puts people first. No action is too big or too small for the World Day for Decent Work – i.e. a table discussion, a huge demonstration, a protest letter, a flash mob action or something completely different.

This year, the global focus is on the world struggle for living minimum wages and a pay rise for all workers. Governments should heed the call from working women and men for decent wages, safe and secure jobs, and an end to greedy corporations setting the rules of the economy. This means ensuring that minimum wage-floors must be enough to ensure a decent standard of living, and that all workers must have the right to join a union and bargain collectively.