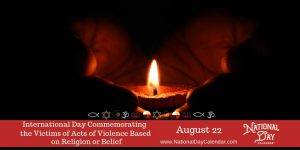 On August 22nd, International Day Commemorating the Victims of Acts of Violence Based on Religion or Belief recognizes the importance of assisting victims of religious persecution.

Many nations also place restrictions on those with certain beliefs. Countries with the most religious restrictions include China, Iran, Russia, Egypt, and Indonesia.

The Universal Declaration for Human Rights serves as the foundation for the UN’s stance on religious persecution and violence. Since freedom of religion or belief is essential to the Declaration, the UN strongly condemns the continuing acts of violence against religious groups. The UN’s position is another reason why they implemented International Day Commemorating the Victims of Acts of Violence Based on Religion or Belief.

To commemorate this day the United Nations vows to reaffirm their unwavering support for the victims of violence based on religion and belief. They will demonstrate this support by doing everything in their power to prevent future attacks and hold those that are responsible accountable.