People are sometimes inclined to abandon what they consider old-fashioned.
They want to get rid of clothes, furniture, or belongings, that they see as no longer in fashion.
Some go further and try to move away from ways of thinking and values which they call ‘ancient’.

It is strange but, sometimes, ‘old’ things and ways can take on a very contemporary appearance!
This reflection came to me as I read the 2nd reading of this Sunday (1 Corinthians: 1:10-13,17).
Paul is writing to the first Christians of Corinth and uses strong language to bring them to their senses!

It has been reported to him that, among different groups of Christians, there are divisions.
They oppose one another by taking sides for the different messengers who brought God’s message to them: Apollos, Cephas, Paul. 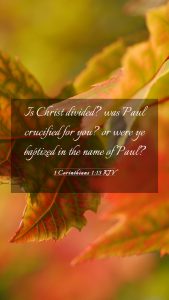 Paul asks them:
“Is Christ divided? Was Paul crucified for you? Were you baptized in the name of Paul?”

We may think the Corinthians receiving this letter of Paul are people of ancient times, yet…
It could be that we resemble them in more ways than one…

Some years ago, I visited a town where, at an intersection of four streets, I saw three different churches!
Each place received Christians of different denominations.
People attending services in each place claimed they were Christians.
They possibly looked down upon men and women entering a different place of worship.
Each group surely considered themselves the true believers, the authentic followers of Christ.

We may ask ourselves what Christ himself thinks!…

Paul tells the Corinthians:
“I appeal to you… that you be perfectly united in mind and thought.”

This may seem an impossible ideal, a remote possibility.
There are many ways of understanding the Christian message.
Teachers and preachers will present different angles, stress different aspects, bring nuances to this or that part of Christ’s message.

But one thing remains certain: Christ is NOT divided.
And he, himself, calls us to unity in our commitment to him.
On the eve of his death, he prayed to his Father precisely for this:

Could we fail to pray – and live – as Jesus prayed for?…

Note: Another text is available on a different theme, in French at: https://image-i-nations.com/3e-dimanche-de-lannee-a-2023/