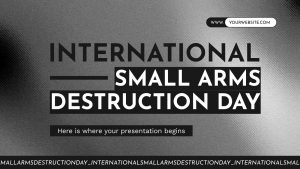 This date marks the International Small Arms Destruction Day, a date initiated by the United Nations in 2001 to remind the threat that the excessive and destabilizing accumulation of and illicit traffic in small arms and light weapons pose to peace and security, and highlights the importance of destroying surplus weapons as a key measure to reduce illicit arms flows and build safer societies where citizens can develop their full potential.

Illicit firearms are often catalysts and elements that aggravate the impact and harm produced by other crimes, including violent crimes, organised crime, drug trafficking or terrorism, among others, posing a major threat to human security and social stability, whilst standing as a serious obstacle to the achievement of the Sustainable Development Goals.

Over the past decade, arsenals have proliferated at global level. According to Small Arms Survey, it is estimated that there are approximately 1,13 billion firearms in circulation, among which 857 million are held by civilians; 133 million by military; and 22,7 million by law enforcement.

The larger the number of uncontrolled arms in circulation, the more difficult it is to ensure effective control over them throughout their entire lifecycle. Stockpiles become potential targets of thefts and attacks, and diversion points of firearms to the hands of criminals, non-state armed groups, terrorists, etc., contributing to fuel crime, conflict, gender-based violence, forced migration and innumerable indirect consequences.