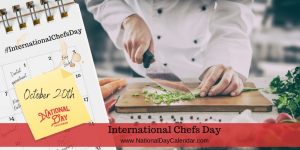 International Chefs Day is celebrated each year on October 20th. The day focuses on educating kids around the world about eating healthy. It’s also a day for chefs to pass on their knowledge and skills to the next generation of chefs.

There are approximately 942,000 chefs, head cooks, and food and serving supervisors in the United States. Along with overseeing the daily food service operation of restaurants, chefs also direct other cooks in the kitchen. Chefs use their creativity and knowledge to create and prepare recipes. Additionally, chefs must deal with a multitude of food-related concerns.

The different kinds of chefs include:

Some chefs specialize in preparing certain kinds of food. For instance, a butcher chef is in charge of preparing meats and poultry. A grill chef manages the grill. A pastry chef is responsible for creating desserts.