The expression is familiar: ‘That’s nothing compared with…’

Reading today’s gospel text (Mark 12:38-44), someone may be tempted to say the same of the poor widow’s offering in the Temple: 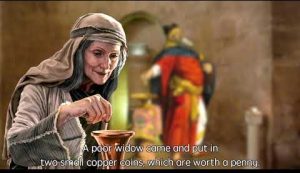 She “put in two very small copper coins, worth only a few cents.”

Of course, that’s nothing compared with…
“Many rich people threw in large amounts…” 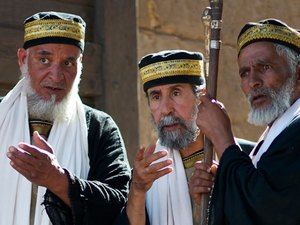 Those who happened to see the woman putting in her humble offering may have been tempted to make such a statement.
But in all the gospel texts reported to us by the different writers, nowhere can we find these words spoken by Jesus.

It seems that for Jesus, comparing people and their offering is something he cannot do.
For him, whatever we give, whatever we are ready to contribute, is precious to him –
no matter how small, no matter how insignificant it may appear to other people.

What comes from the heart, what is given wholeheartedly, this is the only thing that matters to God.
For him the value is not in the object itself but in the intention to please him.

Something truly encouraging for us who can find ourselves so rich… with so little!

Note: The scene of this gospel is presented in a video (in French) at:https://youtu.be/q3wwpTDlPPI

And another reflection is available on a different theme, also in French at: