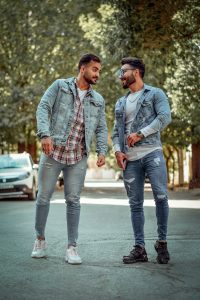 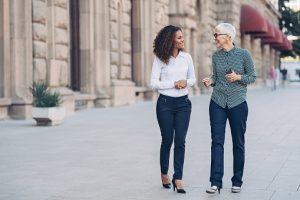 Meeting someone on the road – a friend, a neighbour, a colleague – the questions often arise:
“Where are you coming from? Where are you going?”

The place a person has left from, and the place where he/she is going to.
The point of departure and the planned destination…
It seems obvious that being on the road implies this. 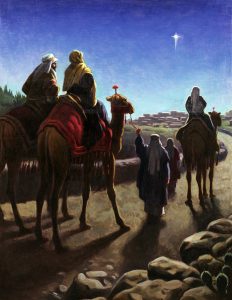 The gospel text of today leads us to meet some people who are precisely on the road (Matthew 2:1-12).

Magi – wise men coming from the East, we are told.
And they are going to a place they are not too sure about… some mysterious destination.
At one point on the way, they will stop to ask more about it saying:

“Where is the infant king of the Jews?”

This question would not be asked nowadays.
But THE question that should be asked is…
Where do I come from and… where am I going… in life?!

We may not be able to change anything to where we have been so far,
but we, definitely, can do something about where we are moving to…

A destination… some people call it ‘a goal’ which they pursue with all the energy they can muster.
Something they have fixed for themselves to reach, no matter the cost.
A few would say: “Something worth living for, something worth dying for…”

At the beginning of a new year, it is good to ask: ‘Do I have such a purpose in life?’
What if this were not a place but… a Person?…
No longer “The infant king of the Jews”, but the one who has revealed himself as “God-with-us”.

Because this is the one who is, not only our destination, but our faithful companion on the road…
The Magi could not yet know him as such, but we do!
Or… do we?…

Note: Another text is available on a different theme, in French at: https://image-i-nations.com/fete-de-lepiphanie-annee-a-2023/

Feast of the Epiphany, Year C

Today’s feast – the Epiphany – is often called: ‘the Feast of the Kings’ referring to the Magi. They are presented to us as being three Wise Men that legend describes as kings.

If we accept this, the text of Matthew’s gospel today (Mt.2:1-12) refers to… five kings! You are puzzled…

Well, the three Magi, and… King Herod, and the one the Wise Men inquire about as being “the king of the Jews”!

The word ‘Epiphany’ means ‘manifestation’ – a manifestation that entails a revelation. As I reflect about this, I see in these five ‘kings’ a symbol of humanity itself.

William Shakespeare has written: “All the world’s a stage” – somehow the text of Matthew somehow illustrates this.

The Wise Men are the symbol of people searching, searching for someone – the one giving the meaning of life.

Feast of Epiphany, year A

Day after day, week after week, the Bible texts call to us in different ways.
We believe that this is God’s message addressed to us.
We are convinced that the words we hear are not simply human words but God’s own words. God’s messengers speaking to us in his name sometimes ask us to do something.
In the first reading, this is what Isaiah does today (Is.60:1-6). He tells us:
“Lift up your eyes and look around.”

Did you notice how many people go about doing… exactly the opposite?!
Many walk around head bent down, with stooped shoulders…
Their steps are heavy… and, possibly, their hearts as well.

Through Isaiah, God invites us to lift up our eyes to see what?
He wants his people to realize:
“The nations come to your light… all are assembling.”

This is the meaning of today’s celebration on this feast of Epiphany. It is a celebration for all nations, all peoples are called to recognize God in our midst, “God-with-us”.
The Magi – those Wise Men from the East –are the symbol of all the many we may see as strangers, foreigners, outsiders.
They are all called to be God’s people.

They, from afar, who come close to this new-born Child, represent already the Samaritan woman, the Roman soldier, the Syro-Phoenician woman, to whom He will make himself close to.
This will be… Epiphany continued!…
God’s revelation to each and everyone, notwithstanding their nation or language, their origin or belief.

God is the GOD OF ALL – by His own choice! We often hear the Feast of the Epiphany being called ‘the Feast of the Three Kings’. Yet, the Bible does not mention that they were kings nor that there were three of them! But tradition goes on telling us this and telling us something else as well. Yes, it speaks of the three very special gifts that those Wise Men – for they were really so – brought to the new-born Child. We are told that they offered him gold, incense, and myrrh.

On December 31st, we were looking at the past year and all that the Lord has gifted us with! And today, our celebration speaks again of gifts. This word is very much part of our daily experiences. We buy birthday gifts, we exchange Christmas gifts, we present graduation gifts, and wedding gifts must be given to the newly-wed couple. The list could go on for other special occasions.

Suddenly, I ask myself: Is there a list of gifts for… God? Not many people would have some gold hidden somewhere in their house. Incense is used in church, sometimes too by a few people who say they want to ‘feel zen’! As for myrrh, well even the word itself is a little strange…

What can be offered to God? I found my own answer: the very gifts that he, himself, has given us.
So, today I offer him my intelligence so I may come to know him better.
I present him with my imagination and the creativity he has placed within me.
I give him my will so that he may attune it to his will.
To these, I add my memory and all the wonderful things preciously stored there.
Of course, the health he has blessed me with, the healing after some sickness, the safe journeys, the happy occasions, the fruitful ventures,
the kind people around me, the helpful neighbours and faithful friends, and…
Here… I leave it to you to complete your list while I keep on silently unfolding my other gifts before the Lord……………