He came, long ago, but some still speak about him.
What he said, what he did, what he taught, how he related to people.
It was said that: “Nobody ever spoke like this man” (John 7:46).

He was… different, yes, everyone could see this, different yet…
There was something about him that drew people to him.
He did not look for glory or fame, no, he was concerned about others.
One day, they had tried to make him king (John 6:15) but he had escaped –
this was not at all what he had in mind.

Brought before the authority, he told a Roman procurator why he had come to our world (John 18:33-37):
“The reason I was born and came into the world is to testify to the truth.
Everyone who is of the truth listens to my voice.”

If he came back to our world today…
If he came back, would he repeat these words?
Would he find people ready to listen to his voice?

He would be all too aware of: 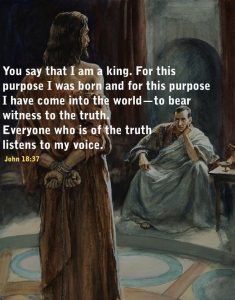 the fake news,
the unfounded revelation of presumed facts,
the systematic distortion of evidence,
the prevailing disinformation,
the exaggeration of narratives,
the manipulation of witnesses,
the bias of some medias,
the misrepresentation of events,
the falsification of documents,
the attempts to pervert justice…

“Everyone who is of the truth listens to my voice.”
Would there be some?
Would we be among them, no matter the cost?

Note: Another reflection is available on a different theme in French at: https://image-i-nations.com/34e-dimanche-de-lannee-b-fete-du-christ-roi-2021/