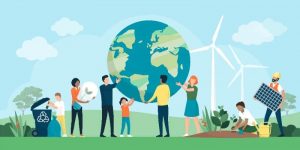 Contemporary climate change includes both the global warming caused by humans, and its impacts on Earth’s weather patterns. There have been previous periods of climate change, but the current changes are more rapid than any known events in Earth’s history.

The main cause is the emission of greenhouse gases, mostly carbon dioxide (CO2) and methane. Burning fossil fuels for energy use creates most of these emissions. Agriculture, steel making, cement production, and forest loss are additional sources. Temperature rise is also affected by climate feedbacks such as the loss of sunlight-reflecting snow cover, and the release of carbon dioxide from drought-stricken forests. Collectively, these amplify global warming.

On land, temperatures have risen about twice as fast as the global average. Deserts are expanding, while heat waves and wildfires are becoming more common. Increased warming in the Arctic has contributed to melting permafrost, glacial retreat and sea ice loss. Higher temperatures are also causing more intense storms and other weather extremes. In places such as coral reefs, mountains, and the Arctic, many species are forced to relocate or become extinct, as their environment changes.

Climate change threatens people with food and water scarcity, increased flooding, extreme heat, more disease, and economic loss. It can also drive human migration The World Health Organization calls climate change the greatest threat to global health in the 21st century. Even if efforts to minimise future warming are successful, some effects will continue for centuries. These include sea level rise, and warmer, more acidic oceans.